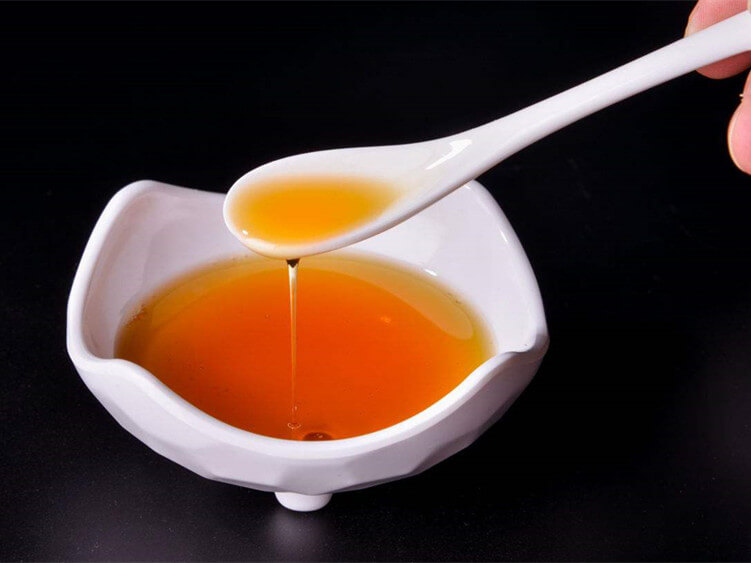 Myanmar is a significant producer of oilseed crops. Approximately 16 percent of the cultivated area or nearly 7.5 million acres of land are sown with oil crops, which is the third most important crop group in Myanmar agriculture after cereals and pulses. The most extensive and traditional oilseed crop is sesame and the next is peanut also called groundnut. Up to now, it is world’s largest producer of sesame seeds and the yield of sesame seed is above world average level; while groundnut production ranks on the sixth position and for mustard seeds on the third position. However, the qualified oil extracted from the oilseeds is limited which is mainly for domestic use. The oil processing industry is underdeveloped in Myanmar and the reason can attribute to the export prohibition in the early years and the poor development of the oil extraction technology.

Myanmar Has Large Potential for Development of Vegetable Oil Industry 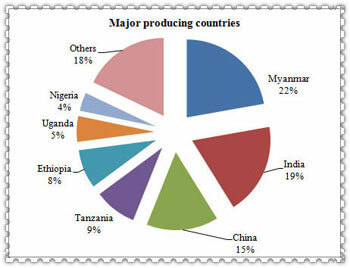 Sesame is the most extensively grown oilseed crop in Myanmar. It occupies an estimated 43 percent of the total oil crops plantation area, about 1.6mn hectares, which is the highest among all oil crops in the country. Myanmar leads the world in the production of sesame(around one-fifth of the global production) and produces 50 percent more sesame than the next biggest producer, India. In 2009, Myanmar overtook China and India to become the world’s largest sesame producer. The country produced a total of 890,000 tonnes of sesame in 2013, accounting for nearly 20 percent of the global production.
Although Myanmar is the world’s largest sesame producer, its share of global trade is less than three percent. The value-added product made from sesame such as sesame oil, sesame paste is seldom exported to the foreign market. Besides, there is little international demand for Myanmar’s low-quality sesame oil production. Therefore there exist significant profit potential in producing high-quality sesame oil production for markets such as Japan, China, and Korea. Myanmar’s current oilseed processing technology and infrastructure are simply incapable of producing abundant oilseeds products especially the edible oil to meet the global specifications.

As for groundnut, Myanmar increased its production of groundnuts at a rather constant pace since 2003. The production increased from 0.9m tonnes in 2003 to 1.4m tonnes in 2013, making it the sixth-largest producer of groundnuts in the world. The production value of groundnut accounts for nearly 5 percent of Myanmar’s agriculture GDP and it occupies 24 percent of the oilseeds crops plantation area in the country, which is the second-highest among all oilseed crops. The oil content of groundnuts seeds (without pods) is really high around 42-56%, therefore the groundnuts are mainly used for oil extraction and for the domestic demand for the edible oil.
Since groundnuts play a very important role in Myanmar’s edible oil industry, its export has been controlled tightly by the government since the late 1980s and is largely banned. The strict restrictive policy constrains the development of the local oilseeds industries to a large extent.

At present, the annual production of vegetable oil is around 0.5million tons, and every year there are still 0.35 million tons mainly the palm oil to be imported from foreign countries. With the increasingly growing population in recent years, the domestic demand for the edible oil is becoming large. To solve the long-term severe shortage of edible oil, how to achieve self-sufficient is a top priority.

The Current Situation of the Myanmar Oil Processing Plant

The majority of oil millers in Myanmar have poor oil making equipment and operate on a small scale. Many small-scale oil millers are generally located near the villages and extracted oil for their own consumption by using the traditional processing methods---a male water buffalo “one ox power engine”. The oil drizzles out of the bottom of the oil press machine and collects in the small container just beside the mill operator’s left foot. The peanut meal that remains after the grinding process is fed to chickens and oxen. Frankly, this kind of oil processing is time-consuming, low-efficient and the quality can not be guaranteed. Besides, related processing equipment made in Myanmar is out of design which results in the yields of low-quality edible oil and causes waste. Many oil millers are aware of the need to update their equipment and increase their production.

● For the production of high-quality peanut oil

The first step for making peanut oil is to remove the shells of peanuts and separate them from peanut kernels by using automatic peanut shelling machine.

In order to get pure peanut oil, the red skin of peanut kernels should be removed. Antiquated peanut peeling methods cannot support the large-scale peeling process and its labor and time-consuming. An advanced peanuts peeling machine is the way to solve this problem. Automatic peanut peeling machine is suitable for many scale business which is specially designed for removing the red skin coat of the peanuts and making the peanuts taste much savorier. And at the same time, automatic peanuts peeling machine keeps the peanut kernels as integral as possible.

4. The pressing process of peanut oil

Roasted peanut kernels are pressed by an automatic oil press machine which is equipped with automatic temperature control system and oil filtering device to get quality peanut oil.

There are mainly five basic processing steps of peanut refinery: degumming, neutralizing, bleaching, deodorizing and dewaxing. Refined peanut oil has bright and pure color and are healthier for people. 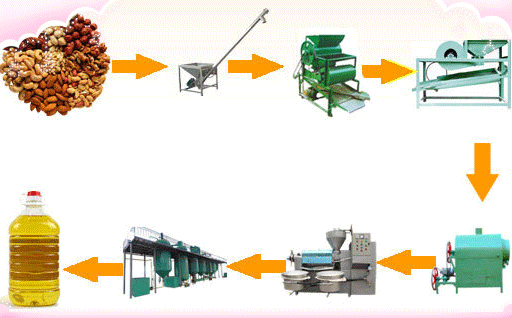 ● For the production of quality sesame oil

1. The cleaning process of sesame seeds

Before extraction of sesame oil, clean the oilseeds is also significant. Some people argue that cleaning is unnecessary, but actually it is really important. Using clean oilseeds can guarantee high sesame oil output and the quality of the extracted sesame oil. The cleaning process of sesame is taken by sesame cleaning machine, which aims to remove the stones, dust and any other impurities from the sesame seeds easily and effectively.

After the roasting process of sesame roasting machine. After roasted, sesame seeds present pleasant flavor and become crisp and thus the sesame seed oil is palatable.

3. The pressing process of sesame oil