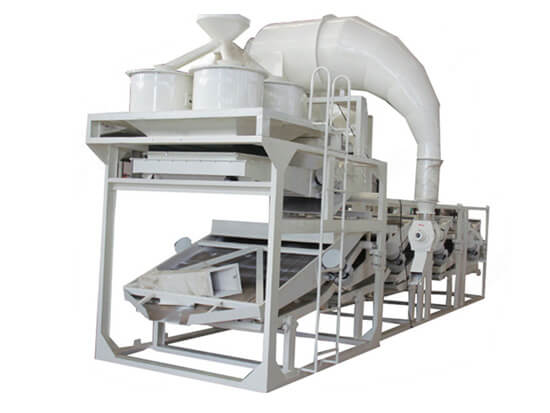 Get to Know Castor Seed Shelling 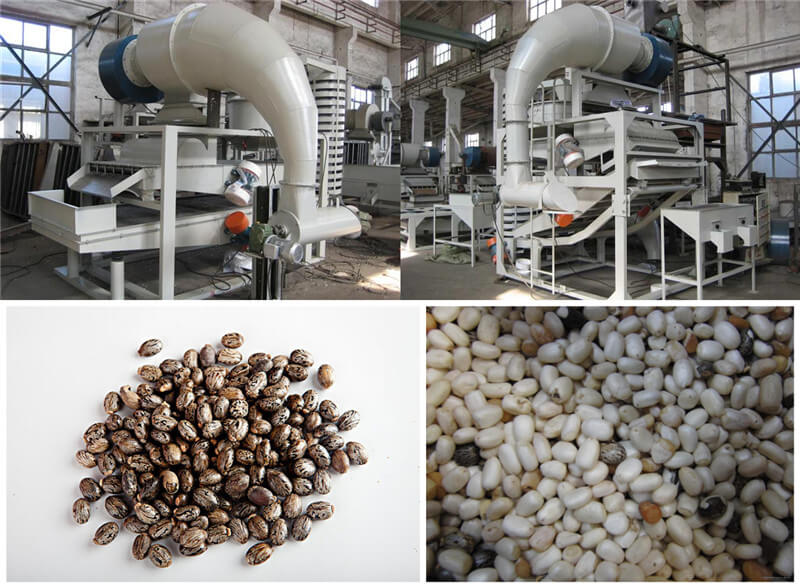 The castor seed shelling machine has similar shelling functions like other nuts shelling machines. Light caster shells are blown out by airflow from inner shaker tables. Other kernels and castor seeds mixture will be separated by gravity tables. Our castor shelling equipment can process castor seeds in a different size at one time. Castor seeds are cracked in various gap and pressure. Unshelled castor beans will flow to the next sheller to be cracked again. Multiple and repetitive cracking steps ensure a 100% shelling rate.

1. In view of the fact that castor seeds are small in size and little clearance between shell & kernel, we design this shelling machine with a low frequency which can improve the shelling rate and at the same time reduce broken kernel rate.
2. We adopt the negative pressure vibrating separator to sort out all the shells and discharge the shells out through shells-discharger.
3. Our kernels separator combines gravity separation with vibration to achieve the percentages of seeds in the final kernels is less than 1%.
4. The unshelled seeds after the first round of shelling will be lifted by the elevator to de-hullers for re-shelling.
5. Easy operation, high automatic degree, safe and reliable.
6.Optimum equipment for large-scale, small and medium-sized enterprises who are in the oil crushing industry with castor bean kernels or in the pharmaceutical industry made of castor bean shells or husks.

● The castor oil plant, springing from Eastern Africa and India, is widespread throughout the world. In a warm climate, the castor oil plants can grow up easily and often be found on wasteland.
● The castor oil plant has a different appearance in various species. Generally, we sort them for leaf and flower(that’s ornamental value) and for oil production. The castor oil plants have a fast-growing cycle that they can reach the height of a small tree, in around 12 meters or 39 feet.
● The seed of the castor oil plant is the castor bean while it not a true bean. Castor seed is the source of castor oil, which has a wide variety of uses. The castor seed contains oil in 40%-60% that is rich in Ricinoleic Acid. Castor oil and its by-products are mainly used in the manufacturing of soaps, lubricants, paints, dyes, coating, inks, cold resistant plastics, waxes, nylon, and pharmacy. Castor essential oil also has beauty functions.